Andrew Carton (left) and Ryan Helland, recent graduates from the University of Iowa, both work on the Iowa-led TRACERS mission. Carton is overseeing the development of a circuit board critical to the research, and Helland is helping to build a magnetic search coil that will measure magnetic fields.

From small towns to a big NASA gig

You don’t need big-city credentials to succeed at the University of Iowa.

Just ask Andrew Carton and Ryan Helland. Each hails from a small town in Iowa, discovered a love for physics at the UI, and soon after graduating scored jobs on a space mission that is the largest externally funded research endeavor in university history.

The Iowa-led mission, Tandem Reconnection and Cusp Electrodynamics Reconnaissance Satellites (TRACERS), received $115 million from NASA to study the mysterious, powerful interactions between the magnetic fields of the sun and Earth. TRACERS is part of a larger initiative, NASA’s Explorers Program, studying how the sun affects space and the space environment around planets.

Carton and Helland were hired to the TRACERS team within months of graduating from Iowa in May 2020. Carton is overseeing the development of a circuit board critical to the research, and Helland is helping to build a magnetic search coil that will measure magnetic fields.

Neither expected such an opportunity so soon after graduation.

“You feel like you’re doing something important, and at a high level, that’s going to further your career,” Helland says. “It’s very lucky for me, my first job working on a NASA grant this big.”

“I would say that it makes me feel very privileged and very humble,” Carton adds, “to be at my age in the position that I am.”

Helland grew up on a third-generation family farm outside Huxley, in central Iowa. Carton comes from Earlville, a community of about 800 in eastern Iowa. They came to Iowa unsure what they wanted to achieve but found academic opportunities and people eager to help them succeed.

Helland learned about physics at the university when he visited a professor, Vincent Rodgers, to ask him about concepts he had come across while reading a book on quantum mechanics. Before he knew it, Rodgers had invited him to attend meetings involving his research group.

“Here I am, a freshman sitting in on his research meetings,” recalls Helland. “It was really cool.”

Carton became interested in physics when he learned about Iowa’s long, distinguished history of space discoveries while taking an introductory physics class taught by Craig Kletzing, the lead scientist on the TRACERS mission and the Donald A. and Marie B. Gurnett Chair in the Department of Physics and Astronomy.

Helland switched his major to physics soon after that first meeting with Rodgers. During the summer after his first year, Helland was working in the department’s machine shop when he had a serendipitous encounter with George Hospodarsky, a research scientist in the Department of Physics and Astronomy.

“I was moving a shelf for him, and we got to talking, and he liked me, and he hired me as a student data analyst,” Helland says. 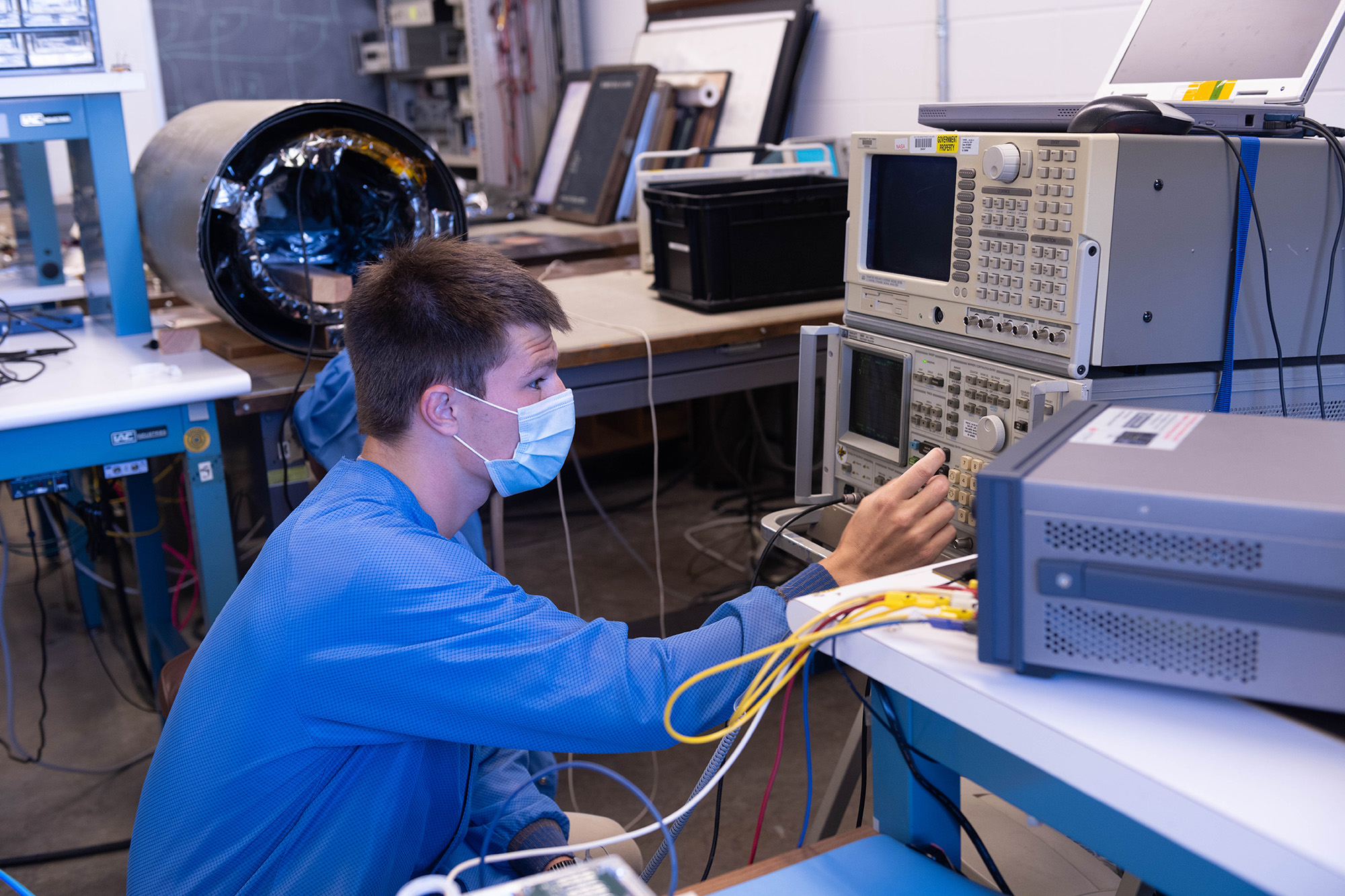 “Although the university is big, there are people who will look out for your best interests and really want you to succeed.”

“Dr. Hospodarsky had me looking at data about lightning on Jupiter,” Helland says. “Just thinking there is a lightning strike happening across space, and we’re getting the data about it in Van Allen Hall—that’s just pretty crazy.”

Carton, an electrical and computer engineering major, remembers one episode when he overheard a student named Suman Sherwani—now working at SpaceX—ask her adviser for guidance about which of two NASA internships to accept.

“I was literally wearing a NASA sweatshirt at the time, and I was like, ‘Wait, did you say these internships came because of Iowa?’” Carton says. “It was the first time I realized there were opportunities directly out of college here.”

Now, Carton and Helland are the ones who realized the opportunities at Iowa.

“Although the university is big, there are people who will look out for your best interests and really want you to succeed,” Carton says.

“Anyone who comes here, no matter your interest, there will be opportunities here,” Helland adds. “If you just talk to people, if you can muster the courage to talk to a professor and be involved, you’re going to get somewhere.”

The story also appeared on the NASA TRACERS blog.