An article written by Richard C. Lewis, published on IowaNOW 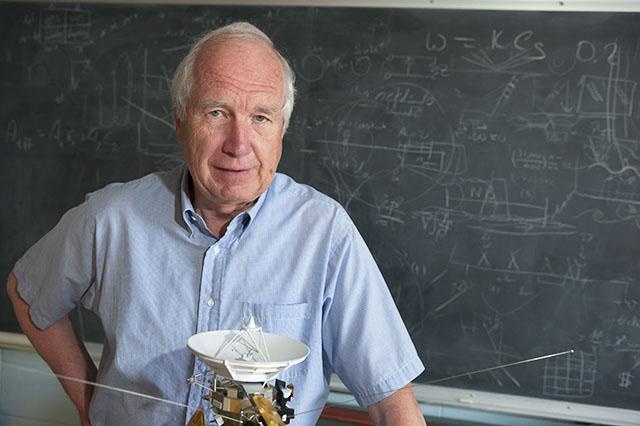 Gurnett entered Iowa as a freshman in September 1957, the year the Russians launched the orbiting satellite Sputnik 1, ushering in the space age. His timing couldn’t have been better: Within a few months, he was working for James Van Allen, the famed UI physicist who discovered the harsh radiation environment around Earth that would bear his name.

Gurnett earned his undergraduate degree in electrical engineering in 1962, and his doctoral degree in physics in 1965. He joined the UI faculty that same year.

When he retired in May 2019, Gurnett pointed to a litany of accomplishments that few—if any—will be able to match: He earned his undergraduate, master’s, and doctoral degrees from Iowa, just when space exploration began; he is considered by many the founder of the field of space plasma wave physics; his discoveries include solving how auroras are created, the first detailed measure of radio emissions from the outer planets, and informing humankind of the first spacecraft to leave the solar system and reach the realm among the stars.

“My father was extremely proud of having spent his career at the University of Iowa and was deeply committed to the future of experimental space physics at Iowa,” says his daughter, Christina Gurnett. “He continued working until the last week of his life, giving interviews and recording talks on Zoom. His legacy will continue through the work of the students he inspired through his teaching.”

For more than 50 years, Gurnett taught at Iowa —a total of 111 undergraduate and graduate-level classes, ranging from General Astronomy to a Space Physics seminar.

“Don Gurnett is a legend in space exploration who has made profound contributions to the university’s teaching, research, and institutional profile,” says UI President Barbara Wilson. “His theoretical observations and experimental findings over a 60-year career—from the dawn of the Space Age to the present—have revolutionized the field of space plasma physics and have broadened humanity’s knowledge of Earth and space. His impact on the UI has been equally noteworthy—from the multitude of students he’s taught and mentored to the sustained goodwill he has created for the university. He defines what faculty greatness means at the UI.”

Gurnett was born on April 11, 1940, and grew up on a farm near Fairfax, Iowa. From childhood, he was fascinated by flight. He designed and flew model airplanes with a club at the Cedar Rapids airport, where he met a German expatriate scientist named Alexander Lippisch, who had developed the first operational rocket‐powered fighter plane and was an early influence on Gurnett. He also learned from an old textbook borrowed from the Cedar Rapids Public Library how the ancient Chinese designed rockets with saltpetre, charcoal, and sulphur, and he decided to build and fly his own rocket-powered models using the same materials.

“This doesn’t sound exceedingly smart, but I made rockets,” Gurnett said at the time of his retirement in 2019. “I learned pretty much on my own. This was the beginning of a scientist thinking.”

Those years spent building rockets and model planes paid dividends when Gurnett began his studies in electrical engineering at Iowa. He admitted he hadn’t heard of Van Allen when he arrived on campus as a 17-year-old, but that changed with Explorer 1’s launch on Jan. 31, 1958.

About a month later, Gurnett received a letter from Van Allen about his application. He was hired.

“I think he needed people who knew electronics,” Gurnett said.

Gurnett started working for Van Allen as a sophomore in fall 1958. Alongside a small group of faculty and graduate students, Gurnett participated directly in the design, building, and flight of more than a half-dozen missions, including in June 1961—the first spacecraft entirely constructed at a university and outfitted with the first digital telemetry system.

“I remember coming home, when the robins were waking up to sing, and then going to classes,” said Gurnett, who added for some stretches he worked up to 80 hours a week in the lab. “It was very exciting. You can’t appreciate how working on a national objective to catch up with the Russians, how important it was in those days. The University of Iowa was the center of space research. And I was right in the middle of it.”

Gurnett continued to be in the middle of space research for the next six decades, amassing a record of instrument building, discoveries, and scholarship in space plasma physics that has revolutionized the field.

He was the first to characterize strange near-Earth space sounds, such as whistlers and dawn chorus. He helped solve how auroras on Earth are created, from data collected by instruments he designed and built. Other Gurnett-inspired instruments on separate missions yielded the first detection of lightning on Jupiter, and further defined Saturn’s magnetosphere and exquisite rings. More recently, Gurnett led a team of engineers and scientists in the Department of Physics and Astronomy in designing and building a radar detector for the Mars Express mission to probe the Red Planet’s subterranean permafrost for evidence of water.

In all, Gurnett was part of 41 space missions, and nearly two-thirds of the 67 spacecraft projects the UI has been involved in.