After graduation, our students go on to prestigious graduate programs leading to careers in teaching and research, or find employment in industry or government agencies. For more information on opportunities after graduation, visit the Undergraduate Careers and Opportunities page. Here are some of their stories: 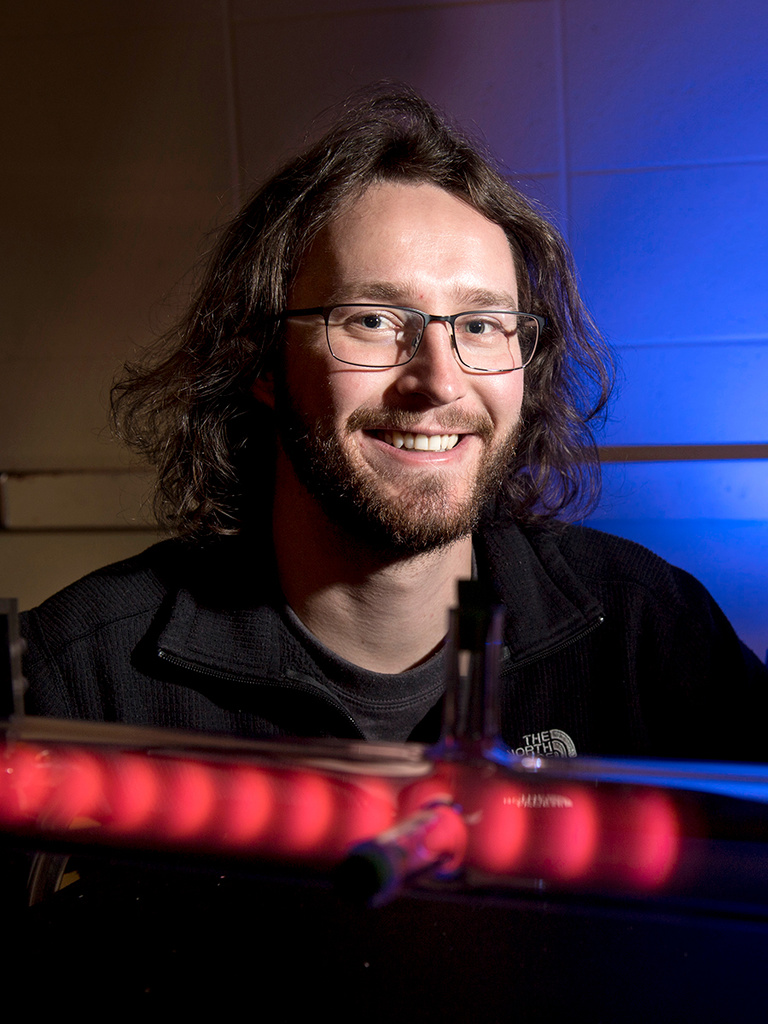 While I learned many technical skills that have been useful post-graduation, I feel that the most important thing that I learned at the University of Iowa was a sense for collaboration. Seeking expertise from others and lending it when appropriate was always encouraged and fostered as a proper path to success. It was not until the last few years of my undergraduate career that I realized this.

I had a chance to work with students and researchers across the country and the globe. Learning that you cannot do everything on your own and leaning on others’ expertise helped me to develop as a student and researcher.

I am currently enrolled in the Physics PhD program at UCLA. I work on experimental plasma physics on the Large Plasma Device. I study the effects of radio frequency wave injection to the device. The scenarios we investigate are similar to how radio waves are used for heating and current drive in magnetic fusion experiments. I am able to use the skills I learned in both my physics and engineering coursework at Iowa. Whether it is working with a new amplifier circuit or analyzing probe data, my time at Iowa helped prepare me to tackle a variety of challenges presented to me as an experimentalist.

Read more: Why the University of Iowa was a great place for Joshua to launch a career in plasma physics. 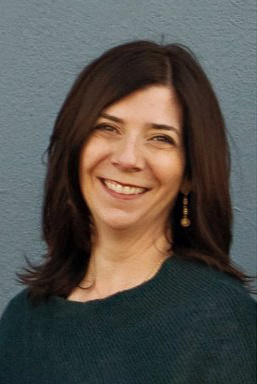 I would say the most impactful thing I learned was how critically important is it is to put the knowledge gained in the classroom into practical use to gain a real understanding of what it takes in terms of time, collaboration and energy to investigate and study physics. Learning this was a direct result of opportunities I was afforded while a student in the Department of Physics and Astronomy. I was able to work in one of the labs within the department which was an excellent introduction into the work that is done to prepare for a physics experiment. I was also offered an opportunity to work as a University of Iowa intern at Fermilab during the summers in support of the SELEX experiment. This is where I got a great peek into the vision and dedication and years and years of work that it takes to build the equipment, the analysis tools, to successfully collaborate with international partners, and to execute a high-energy physics experiment. This was the critical, eye-opening experience that showed me how many different ways there were to be involved in physics. This is the experience that led me to the career I have today. I quickly grew to enjoy software development by helping to build analysis programs that would be used to analyze data from the experiment.

I learned that not only was the discipline of physics endlessly interesting but that it was much, much bigger than I really could have imagined without the experiences the department gave me to work in the field while I was a student. Most importantly I learned that there were places for all different sorts of expertise and levels of education for teammates to have an impact.

After graduation, I worked at Argonne National Laboratory (ANL) as a software developer. I wrote control systems software for the ATLAS accelerator at ANL. I learned a lot there and was able to further mature my software skills. From there I applied for a position to develop software for the manned spaceflight program at Johnson Space Center. I moved to Houston and have been here ever since. After moving to Houston, I quickly realized how valuable it was to know how to develop software and have a physics background. I have worked on many different vehicles and programs over the years with the bulk of my experience centered around software development in support of Guidance Navigation and Control systems for spacecraft. I have supported NASA as a contractor and was offered a civil servant position with NASA in 2004. I worked at NASA as a civil servant for 10 years. I have worked on the Space Shuttle program, the X-38 project, the AERCam project, the Orion program, the Constellation program, and now Gateway. In 2016 I decided to leave NASA and join a Houston startup that had a vision to bring Aerospace expertise to the medical and energy sectors here in Houston. After almost three years there I knew it was time to break off on my own and start my own software engineering company and, Vedo Systems was born.

I have found that having a physics degree combined with software development skills has been absolutely invaluable. The success I’ve had working integration issues in particular is a direct result of having a physics background. I am able to discuss technical issues across disciplines and bridge the divide between teams. Because of how valuable I know this has been, I center Vedo Systems recruiting activities around finding candidates with similar cross-discipline skills. I know this is the reason we have had great success and growth. 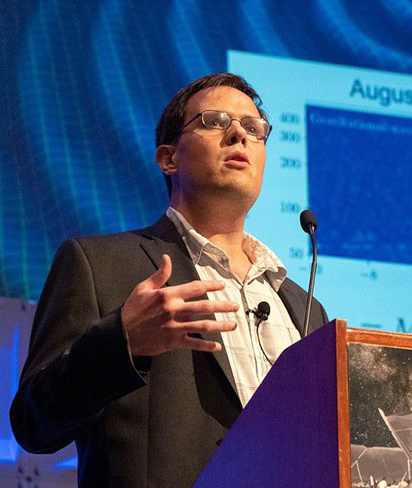 A visit to UI Physics with my high school physics class made a big difference in my choice to attend the University of Iowa. Speaking broadly, the biggest thing I received at Iowa was a passion for the main subject matter of my professional research (physics and astronomy) while also having an opportunity to learn about completely different subjects (e.g. taking courses in writing, philosophy, history, politics, etc.).  I greatly enjoyed a diversity of classes in Physics & Astronomy on advanced subjects, ranging from Radio Astronomy (Profs. Mutel, Spangler) to Particle Physics (Prof. Reno) to Mathematical Methods (Prof. Scudder).

I also was strongly influenced being involved in undergraduate research, working in the lab and machine shop with Dr. Kletzing and Bounds (my first two summers at Iowa), an REU at the Very Large Array in New Mexico (my third summer, at the suggestion of Prof. Spangler), and then a senior project on astrophysics theory (with then UI Prof. Chandra).  It is clear these experiences shaped my ultimate professional trajectory.

After graduating from Iowa, I went on to get my Ph.D. in Physics at UC Berkeley (2003-2009).  After that, I received a NASA Einstein Postdoctoral Fellowship, which I took to Princeton University (2009-2012).  I was then hired as an Assistant Professor at Columbia University in 2013, where I have been since (I was tenured in 2017 and became a full Professor in 2020). Today I remain an active researcher in astrophysics theory, who mentors undergraduate/graduate students and postdoctoral researchers.  I have been recognized with international awards, such as the Bruno Rossi Prize of the American Astronomical Society, the New Horizons Breakthrough Prize in Physics, and a National Laureate of the Blavatnik Awards for Young Scientists. 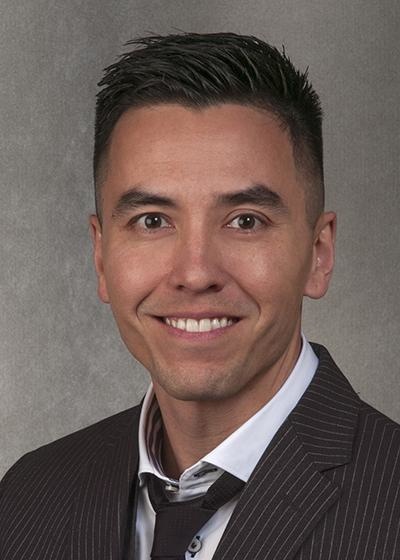 The most important thing that I learned while at Iowa was that paths can change.  I came to Iowa quite certain that I would be a medical doctor.  It was something that I told myself throughout high school and even earlier.  I wouldn't say that it was my dream job, but it just seemed like the right thing for me to do.  However, after going through three years of coursework I realized that the biological sciences weren't really my calling.  During my Biology degree pursuit (I think I was one class shy of the degree) I took physics and also took astronomy as an elective.  I really enjoyed the classes, but more so I enjoyed the ability to ask some pretty incredible questions about the universe while studying in these fields.  The exploration space of physics and astronomy resonated with me more than my pre-medical courses.  I took a leap of faith in switching majors (something that not everyone was a fan of, including my mother), but was so glad after I did.  The breadth of course choice at Iowa really allowed this to happen.  Being in a College of Liberal Arts & Sciences afforded me the opportunity to experience a wide range of courses which in turn helped me to hone down my interests.

My research and teaching have continued to grow from the strong foundations that were laid at Iowa.

Since graduating from Iowa, I went on to graduate school at the University of Colorado, Boulder to obtain my Ph.D. in Astrophysics in 2007. While preparing to defend my thesis, one of my committee members showed me a job ad for an Assistant Professor in the Department of Physics and Astronomy at the University of Iowa! The position was for an experimental astronomer and was well-tailored to my graduate experiences, so I applied.  I was quite thrilled when I was offered the job and was happy to be going back to my alma mater.  It made me proud to be teaching in the very classrooms that I sat in as a student and mentoring those that would be future physicists and astronomers. I had a wonderful 8 years at Iowa and once again had seminal experiences for which I am grateful. I moved to the Pennsylvania State University in 2016 and work there currently as a Professor in Astronomy, Physics, and Materials Science & Engineering.