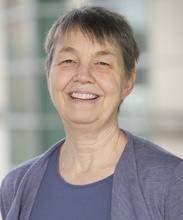 Prof. Mary Hall Reno has been named the new Departmental Executive Officer (DEO) of the Department of Physics and Astronomy, effective Jan. 1, 2023.

Reno succeeds Prof. Phil Kaaret, who left the University of Iowa in December 2022 to join the NASA/Marshall Space Flight Center in Huntsville, Alabama, taking a Senior Scientist position working on and eventually leading the Imaging X-ray Polarimetry Explorer (IXPE) small Explorer mission. Kaaret came to the Department of Physics and Astronomy in 2004 and was DEO since July 2020.

Reno, the Erich Funke Professor in the Department of Physics and Astronomy, is returning as DEO after serving in the position from July 2009 to June 2014. A Fellow of the American Physical Society, she is a theoretical particle physicist who focuses on neutrino interactions and their detection. Her work has applications in laboratory experiments, for example, at a future Forward Physics Facility at the Large Hadron Collider, and in simulations that model extensive air shower signals from cosmic neutrinos for space-based experiments.

In 2019, the College of Liberal Arts and Sciences named Reno a Collegiate Fellow, the college's highest honor for faculty. The college also recognized her excellence in research and teaching by naming her a Dean's Scholar in 2000, and in 2003, the UI Office of the Provost named her a Faculty Scholar. Reno was a member and former chair of the APS Committee on the Status of Women in Physics.

Reno earned her Ph.D. in physics from Stanford University. Before joining the UI faculty in 1990, she was a postdoctoral researcher at the Fermi National Accelerator Center and a visiting faculty member at the Centro de Investigacion y Estudios Avanzados in Mexico City.