Jared Termini in lab at Univ. of Iowa 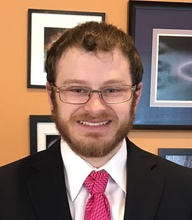 Graduate Student Jared Termini has landed a highly competitive national fellowship that is giving him a unique opportunity to work one-on-one with scientists and engineers at NASA centers all over the country.

Second-year University of Iowa Physics and Astronomy doctorate student Jared Termini is living out his dream—he's working closely with NASA scientists and engineers all over the country.

Termini landed a highly competitive, national graduate fellowship that allows him to work on new technology projects in the realm of astronomy, space physics, planetary science, and more. Specifically, he’s evaluating the performance of cutting-edge UV gratings for NASA’s next generation of space telescopes. He is in the prep phase of his project, which is focused on simulation work, but is moving towards measuring and evaluating prototypes.

As part of this fellowship, he is visiting NASA centers across the U.S., like Goodard Space Flight Center in Maryland, and the Jet Propulsion Laboratory in California. All while working one-on-one with scientists that have inspired him and his career goals.

“My dream has always been to work for NASA. I’ve always wanted to do astrophysics research, but I’ve never really had an interest in going into academia. So, NASA seemed perfect,” Termini says.

Termini said his graduate Professor Keri Hoadley has been a vital support system and that she encouraged him to apply for the NASA Fellowship. He recommends every student try to build relationships with the faculty in their areas of study.

“Don’t be intimidated by talking with professors or asking if you can work with them and their research group. Even if a professor does not have a position available, they can still recommend other professors who do similar research and may know if other professors are looking for students,” Termini explains.