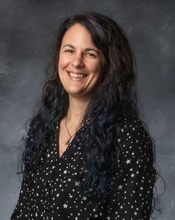 Amid her own NASA-funded work on a telescope meant to unwrap galactic mysteries of how the universe evolved, University of Iowa physics and astronomy professor Keri Hoadley joined the rest of the world this week in marveling at inaugural images from NASA’s James Webb Space Telescope.

From Fort Sumner, NM — where Hoadley is helping develop a suborbital balloon telescope to investigate how pristine gas surrounding galaxies behaves — she got her first look at images from the Webb telescope, which she hopes eventually can inform and supplement her work.

“We're going to be looking at galaxies that are a couple of billions of light years away to understand how those galaxies formed by looking for how gases outside of them — really, really small particles, like hydrogen — might have come to eventually funnel into the galaxies,” she told The Gazette.

The Webb telescope — an international collaboration led by NASA and involving the European Space Agency and Canadian Space Agency — is providing a glimpse into what’s forming inside the galaxies, among other things. The first photos from it were released to the public starting Monday evening.

Although the UI astrophysicist knew the new Webb images were coming this week, she still felt awe when they popped up on her computer. “I’ve been so excited for this,” she said. “So when we saw the new images today, I was absolutely blown away. The deep image made an impression on me personally.”

She likened it to NASA’s Hubble Space Telescope’s “first light” image from 1990 — revealing expansive galaxies in what had appeared to be a blank patch of sky. “But this image, actually, to me blew that out of the water,” Hoadley said of the first Webb image revealing the world’s “deepest and sharpest infrared images of the distant universe to date.” 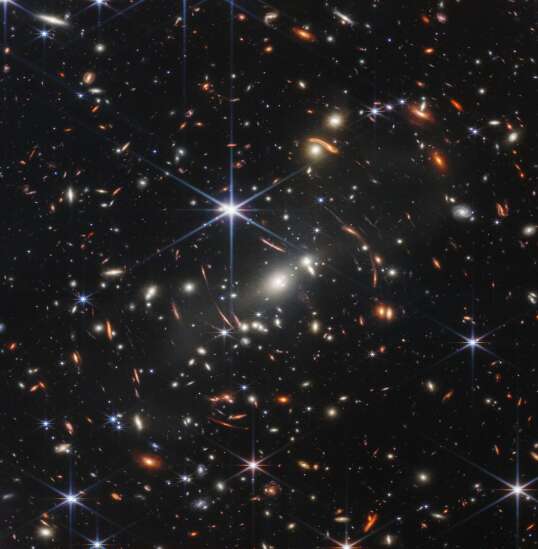 “It revealed just innumerable galaxies in this one deep image, staring back to almost the dawn of the universe,” she said. “It’s seeing galaxies that were just forming. I was at a loss for words. I was just absolutely stunned.”

Explaining how Webb is capable of essentially seeing “back in time,” Hoadley noted light is the fastest thing in the universe, and it has a finite speed. Combined with the fact the universe has continued expanding, “it takes time,” she said. “It just takes time for that light from billions and billions of years ago to finally reach us,” she said. “So what Webb is seeing actually is ultra violet light … from the dawn of time, from when the first galaxies were formed, from 13 billion years ago. But it's been stretched out over time to appear in infrared.”

Hoadley said she was surprised by the sheer number of objects that appeared in the photos. Among the other four Webb photos NASA revealed Tuesday, Hoadley was awed by its analysis of an exoplanet — finding evidence of water, clouds, and haze in the atmosphere.

“This is the first time we can actual target and look for signs of life on other Earthlike planets,” Hoadley said.

Webb experienced a smooth ride to its final destination — a spot on the opposite side of Earth from the sun and about four times the distance to the moon. Experts suggest it could spend the next two decades collecting mindbending images of the universe.

“I think there's a ton of potential,” she said. “Just the five images they revealed today I think are going to lead to just so many new discoveries and new understanding of the kinds of things that we, as astronomers, have really big questions about. “I hope over the next five to 10 years we're going to make new discoveries about all sorts of phenomena in the universe,” she said. “This is just scratching the surface.”

“Each of these images by itself surpasses anything that has been done before, even by Hubble,” he said.

Webb is not only expected to shed light on the birth of the universe’s first stars and primitive galaxies — an epoch feat that could shape the future of astrophysics, Marengo said. "But most important of all are the discoveries that we cannot predict, the unexpected surprises that Webb will reveal,“ Marengo said, likening it to "when Galileo pointed the first telescope to the sky, and proved that the Sun, and not Earth, was at the center of the Solar System.”

by Vanessa Miller, The Gazette