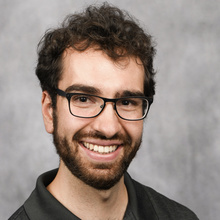 Riley Troyer is a University of Iowa PhD candidate involved with an upcoming rocket mission which will probe pulsating aurora.

Riley Troyer is a West Valley High School and University of Alaska Fairbanks graduate who’s now a PHD candidate and graduate research assistant at the University of Iowa, where he’s studying the aurora.

“Having moved away from Fairbanks, it’s really nice to be studying something that’s kinda constantly reminding me of home and allows me to sort of keep that link I have to Alaska.”

Troyer is working on what’s known as the “LAMP” or “Loss through Auroral Microburst Pulsations” mission, which aims to better understand the phenomenon of pulsating aurora.

“Pulsating aurora are a very common, but often overlooked type of aurora, and that’s because they are usually just barely visible to the naked eye and look lime these patches of aurora that pulse on and of across often wide portions of the sky.”

According to the LAMP mission website, pulsating aurora could be a QUOTE: “significant source of the energy that gets transferred from space to Earth”. Troyer says the plan is to launch a rocket into a pulsating aurora to gather data.

“And measure the electrons which are colliding with the molecules in the atmosphere and producing the light we see as the aurora, so the rocket will be measuring the energy of these electrons.”

That data will be combined with images captured by cameras on the ground, an aspect of the mission Troyer says the public can help with.

“The more images and the more videos we can get, the better science we can do.  And so what we are hoping is that we can reach out to the Fairbanks community and get observations from many different people, more than just the few scientists that are part of the mission.”

Troyer says even
cell phone photos and videos can be processed to provide valuable information.

Even though the picture might not look great to the human eye, might not be the best artistic piece, it can still have a lot of scientific merit.”

There’s a LAMP mission website: lamp-mission.sites.uiowa.edu and a Twitter page (@LAMP_rocket) where people can find out more about the NASA funded mission. There’s also citizen science page: www.aurorasaurus.org. The rocket launch window is February 24th through March 10th, centered around the new moon, when darkness will provide the best chance to see pulsating aurora.