Beloved University of Iowa professor emeritus Don Gurnett, who died at age 85 on Jan. 13, left behind a professional life of many space discoveries and a personal life filled with interesting hobbies, like flying aircraft next to eagles.

In 2004 on the seventh floor of Van Allen Hall, Phil Kaaret looked up to find Donald Gurnett in his office doorway, unable to wait a second longer to discuss a new idea he had thought up.

“When he got an idea in his head, sometimes he would stop by in my office every day for a week and want to discuss it,” said Kaaret, who is the UI department chair of physics and astronomy.

Donald “Don” Gurnett, professor emeritus at the University of Iowa, died on Jan. 13 at the age of 85, after a short illness at The Bird House Hospice Home of Johnson County. 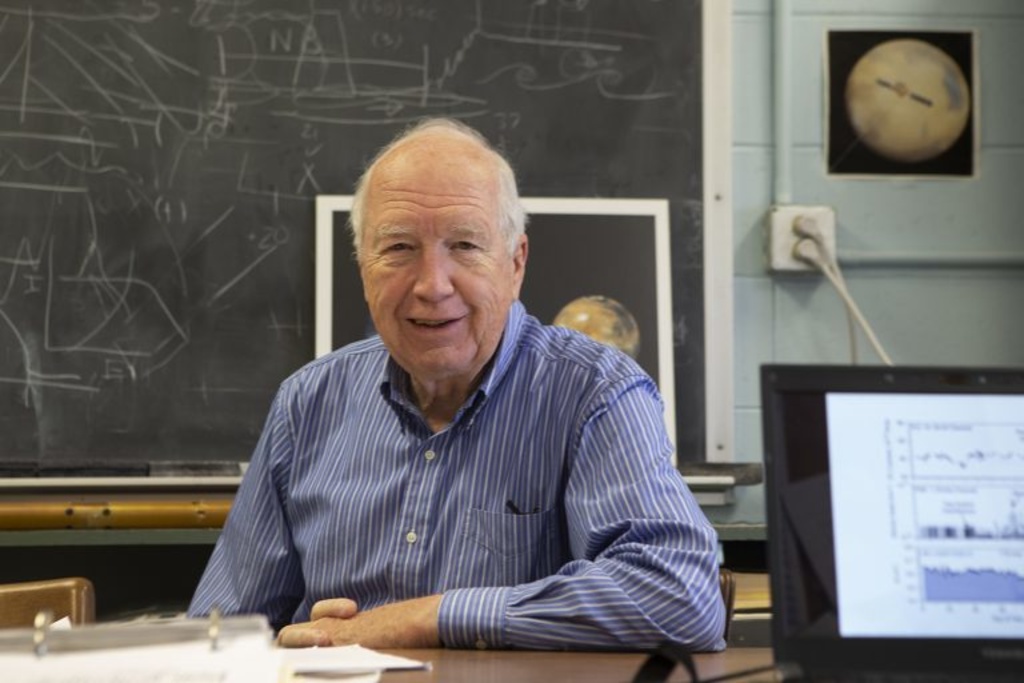 Don worked on over 30 instruments launched into space over the course of his career, including an instrument on Voyager 1 and Voyager 2, which visited all the outer planets.

“In addition to that, he had an instrument on the Galileo mission to Jupiter,” Kaaret said. “He had the instrument on the Cassini mission to Saturn, and he even helped build a radar that was orbiting around Mars to try to look for ice, or water in the form of ice, underneath the surface of Mars.”

Kaaret said Gurnett’s biggest discovery from the past decade was when the Voyager probes finally reached what is called “interstellar space.”

With some of the instruments Don sent into space, he measured and recorded “space sounds.”

Donald A. and Marie B. Gurnett Chair in physics astronomy Craig Kletzing said scientists can record a particular group of waves and create an audio file that plays back sound.

“If you measure them like, let’s say, on our Van Allen Probes Mission, we measured them at 35 kilo samples per second, which is fast enough to hear them,” he said.

Kletzing noted that some of the captured sounds have specific names.

“There’s some called ‘chorus,’ which sounds like birds chirping,” he said. “There’s another one called ‘whistlers,’ which were actually known.”

Space sounds that Don help record are available for the public on a UI website published by the physics department.

Don’s daughter, Christina Gurnett, said her father’s space sounds are the reason his dinner parties are among some of her favorite memories of him.

“He would get out his tape recorder at many parties, and he would play the whistlers and the sounds of space,” she said. “I have recollections of being in my bedroom, which was right above the dining room, and hearing the sounds of space as my dad would entertain and enjoy good conversation with other faculty and friends at our home.”

Don’s sounds of space are incorporated into music written by the Kronos Quartet, Christina said.

“His recordings of space were incorporated into Sun Rings, a composition of Terry Riley’s which received a Grammy Award in 2020,” she said.

When he wasn’t exploring the deepest reaches of outer space, Gurnett flew airplanes.

“He was born and lived in Fairfax, Iowa, and grew up near his grandmother’s home that actually became the first passenger terminal for the current Cedar Rapids airport,” Christina said.

She noted that Gurnett’s interest in flying started showing in the hobbies he chose as a child, when he would build model airplanes. Then, in his 20s, he began flying gliders, or non-motor-powered “sailplanes.”

Christina said her mother always jokes that Gurnett bought his first sailplane before they bought a house.

As Gurnett got older, his interest in planes shifted.

“When I was in high school, he was part owner of a bright red biplane,” Christina said. “Later, he owned a T-6 trainer airplane, so he was often spotted flying in the skies above Iowa City.”

Christina said she believes that her father still wore “his scientist hat” when he was flying, and that is where some of his interest in planes stemmed from.

Christina said her father would often describe how eagles would sometimes surround the wings of his sailplane as he flew.

The physics department expanded at the UI to include astronomy at Gurnett’s suggestion.

Kaaret said Gurnett chaired the committee that hired him to that same department.

“I’m here pretty much because of Don Gurnett,” he said.

“Don played a key role in helping to make sure we got new young faculty members in this area, so that we can maintain our expertise and our leadership in the field of space physics,” he said.

“He took such interest in his students and really looked out for their well-being and just wanted to make sure that they became the best scientists they could,” he said.